Now doesn’t that name conjure memories. The Grey Flash who won over $8.8 million Australian Dollars. 13 wins, 7 places from 32 starts. Six Group 1 wins. The 3rd greatest stakes-earning sprinter in Australian racing history. Famous for his ‘come from behind’ victories. Then in 2018, famous for not wanting to race.

His owners, trainers and fans were perplexed. Was there something wrong with Chautauqua? Absolutely not was the verdict. He was in peak physical condition and good health. He just seemed to freeze as the barriers opened. Rare for a racehorse, let alone one with his stellar career. After further unsuccessful starts and one final barrier trial, he was retired from racing in 2019 by his owners.

Enter Casey Bruce! Chautauqua’s future off the track career was in the hands of this thrilled former jockey and equestrian. With his fame, stunning looks and excellent paces, the show ring beckoned. The journey from racehorse to show horse began.

Chautauqua, aka Sharky at home, is a horse who loves routine. It’s where he is most relaxed. To be successful in the show ring, he would be required to perform three paces in a relaxed and obedient manner. But he’s Chautauqua – the super intelligent racehorse who refused to run. Casey and the team certainly had their work cut out for this plan to succeed.

Once he’d settled into his new home, Casey’s short-term goals were simply to get him out to unfamiliar environments at selected low-stress events. Quite a challenge given his quirky character. He was always a difficult horse to feed, a fussy eater. He had at times been a hard horse to condition and transform into his new shape. She found his anxiety levels would increase once out of routine and months of weight gain would be stripped off in only a few days.

Casey said, “He has suffered from gastric ulcers. I have used other products in the past but he continued to have niggling issues with ulcers. So, with the guidance of Kathie Simpson from Kelato Animal Health, I decided to bite the bullet and have him scoped. Sure enough, ulcers were present once more.

“I’m a big one to listen to the professionals who know more about certain products than I do. With A/Prof Dr Ben Sykes’ recommendation to use. GastroAID Recovery, I immediately saw differences in Sharky’s eating habits. He started to eat more.

“He was a horse that for over a period of 12 months I could only get to eat pellets. No oaten chaff, no lucerne chaff and this wasn’t ideal. Once he started on GastroAID Recovery, I would slip some oaten or lucerne into his feed and he would eat it, when previously he would leave his entire feed or just sift out the pellets. This was a massive game changer for me.

“I can honestly say I have never seen him eat better. Chautauqua now licks his feed dish clean every night. This is such a relief! He eats like your normal horse – a lovely feed every night. With GastroAID in his diet, I’ve also noticed changes to his personality and anxieties. He is now a more relaxed and willing Chautauqua. Content. Settled. Just happier. I believe GastroAID Recovery has been the game changer.

“I love this product and would recommend it to anyone. I can’t believe he is eating the way he eats now. It’s so hard to condition horses at the best of times, let alone an OTT Thoroughbred. To know that his inner health is now being looked after just as much as he is on the outside. Happy Horse, Happy Me! Try it! You will never look back.” 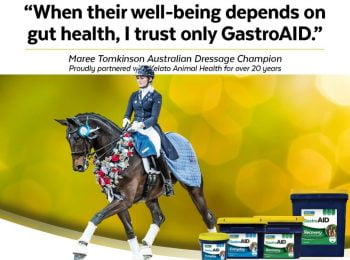 Maree has Friday (IV) on her mind

More milestones ahead for the extraordinary and inspirational Maree Tomkinson. This time Maree and Friday IV (pictured below) are representing Australia at the Longines FEI/WBFSH World Breeding Dressage Championships for Young Horses in Germany. Maree’s top tips With over two decades of experience on her side and being a celebrated fixture on the Australian dressage scene,… 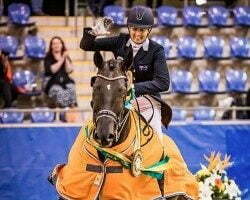 “GastroAID is the headstart you need!” Riding and training at the top of the equestrian world like Rozzie Ryan takes complete focus. This means there’s no room (or time) for anything that doesn’t make tangible improvements to you and your horses’ performance. For this reason, Rozzie has always been careful about the products she uses…. 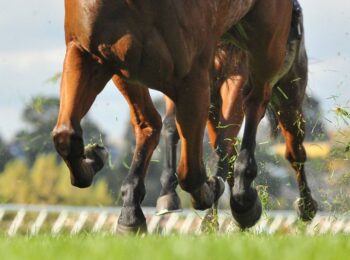 Hindgut Dysbiosis – What it is and how to manage it in racehorses.

The hindgut is a remarkable feature of the horse’s digestive tract. It’s not only important for fibre digestion, but also aids hydration and electrolyte balance, provides the horse with some vitamins and also contributes to immune function. The hindgut houses trillions of microbes that have a profound impact on the overall health and well-being of…